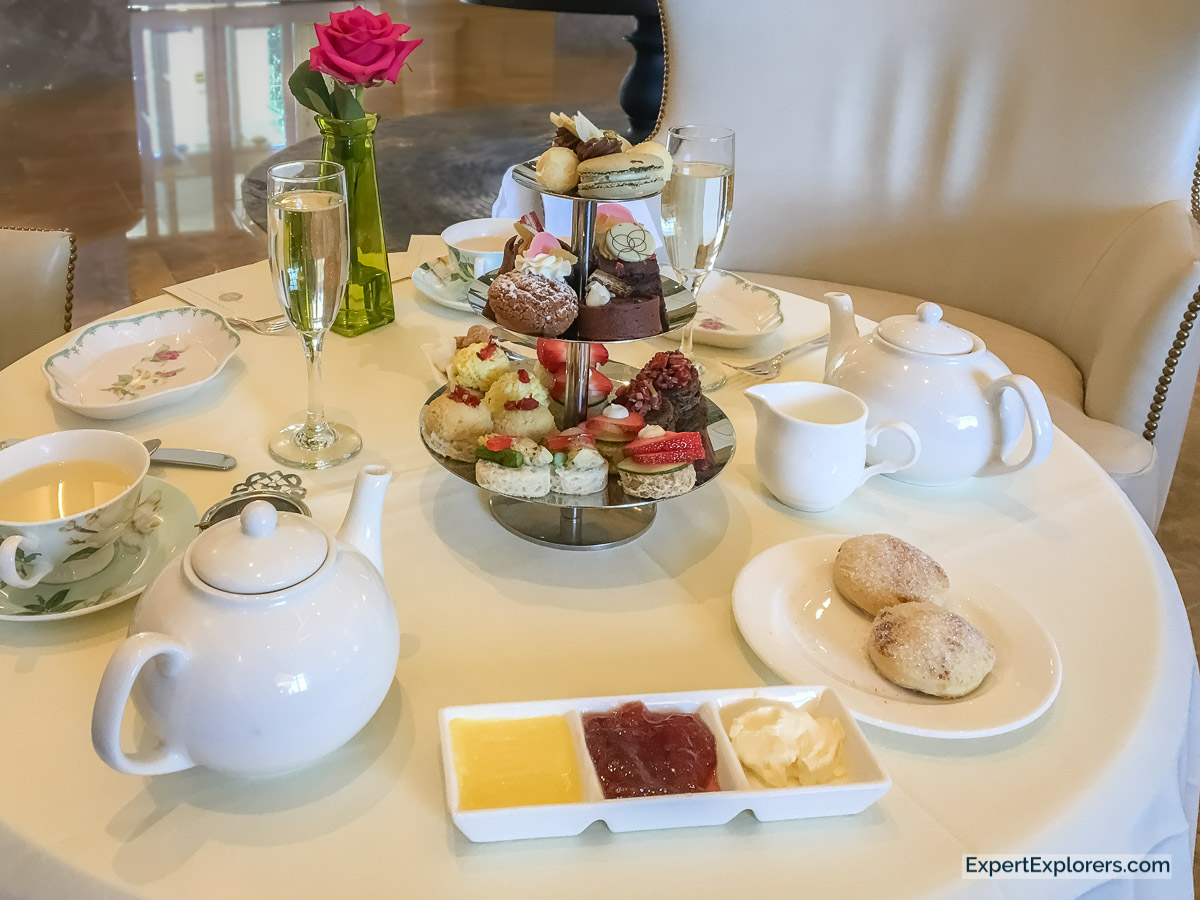 You can support this website, at no additional cost to you, by using our links to purchase; hotel stays, rental cars, travel products and more. Learn more.

After several years of living in the U.K., one of my favorite British traditions is having afternoon tea. I’ve indulged in this luxury from Cambridge to Cornwall and around a dozen or so venues in between. I even served afternoon tea at my wedding reception; yes, that is how much I love it. When I heard the Ballantyne Hotel here in Charlotte had an afternoon tea service, I knew I had to give it a try. But I wondered how the Ballantyne Hotel’s Afternoon Tea service would stack up to an authentic English experience.

I was eager to share this tradition with a friend and get their thoughts. So, for this adventure, I swapped out Jeremy in lieu of a lady’s day with my friend Kathy. As someone who appreciates the finer things in life, and has never done afternoon tea, Kathy was the perfect companion.

When we arrived, to our surprise the Ballantyne Hotel served afternoon tea in the lobby, instead of their luxurious restaurant. Though this initially felt unusual, once sat, the large high-back chairs made the experience feel more private.

To be super fancy, Kathy and I agreed to do the Royal Afternoon Tea. This added a glass of champagne for each of us.

The Teas at the Ballantyne Hotel

Impressively, the hotel partners with the Royal Tea Company of London to offer a respectable selection of teas. There were ten varieties on the menu during our visit, ranging from black and green teas to herbal infusions.

Unfortunately, instead of using an infuser, the tea leaves were loosely placed in the pot to steep for the duration of the service. This can make tea stronger than the drinker prefers. Or, with a tea like Jasmine, which is what I ordered, can leave the tea bitter.

Every prefect afternoon tea starts with three to four finger sandwiches per person on the bottom layer of a three-tiered serving stand.

Typical English sandwich fillers include Coronation Chicken (a personal favorite), Chutney and Cheese, Cucumber with Dill, etc. I wasn’t expecting the Ballantyne to serve these particular sandwich varieties as they are not well known in the U.S. However, it was nice to see a few English favorites in the mix.

At first, the hotel accidentally gave us the vegetarian version. However, they quickly realized their mistake and returned with a full plate of the non-vegetarian options. So, it worked out that we were able to try all of their sandwiches on offer. 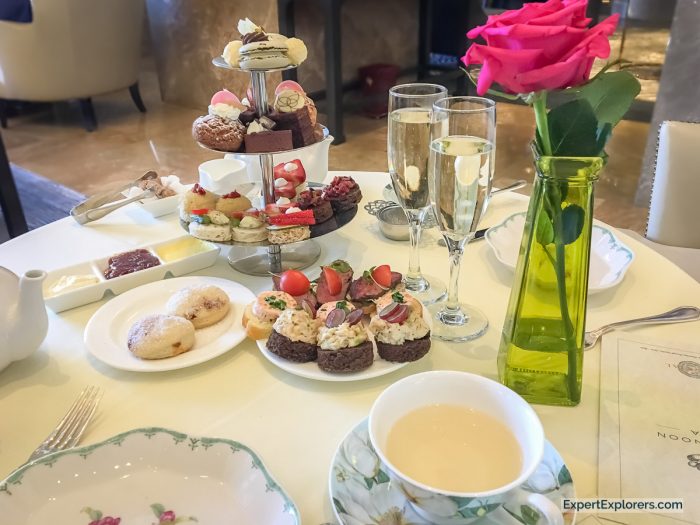 The sandwich fillers were very nice, especially the hanger steak. However, we were both disappointed with the size of the sandwiches. Instead of traditional finger sandwiches, these were small portions on tiny circular cut-outs of bread.

Following traditional afternoon tea etiquette, once finished with our sandwiches, we moved on to my favorite course, the scones.

I was glad to see the traditional accompaniments of jam, cream, and lemon curd, but was again disappointed in the portions. We only received one small scone each, compared with the typical two large scones served in the U.K.

The scones themselves, were different from any English scone I’ve had. They were smaller, with softer tops and lightly dusted with cinnamon. For readers who have never had scones, they look like a biscuit, but are much sweeter. I included a comparison photo of scones from The Ivy in Cambridge, England.

Even though they were different, we both felt the Ballantyne’s version of a scone was very tasty. I just wish they served more than one each.

Finally, on to The Afternoon Tea Desserts

Cream puffs, mini cakes, white chocolate balls, and macarons awaited us on our final course. This part of the service was not only spot on for our taste, but it was also spot on for an authentic English Afternoon Tea. It’s typical to have between three to five miniature decadent desserts for each guest, and these were decadent.

How Does the Cost Compare With The UK?

Comparing cost is a little challenging due to currency exchange rates. At time of writing 1 USD = 0.78 GBP.

For afternoon tea at the Ballantyne Hotel, we paid $42 pp, plus $16 for the champagne. This is comparable with services in the U.K.

For reference only, as culturally the U.S. and the U.K. have very different tipping practices. Typically, 8 to 10% for service is customary in the U.K. Some finer London establishments suggest 12.5%, which is considered high. Tipping in the U.K. is not mandatory, it truly is done only in relation to good service.

Did the Ballantyne Hotel's Afternoon Tea Stack Up to an Authentic English Experience?

There are definitely differences in the experiences. And honestly, I prefer an authentic English Afternoon Tea with traditional finger sandwiches and big fluffy scones.

However, I felt the Ballantyne Hotel did a good job recreating a luxury experience around this beloved English ritual. It was picture perfect, totally luxurious, and oooohhh those desserts.

Overall, I enjoyed my experience at the Ballantyne Hotel and I’m glad I was able to share the experience with wonderful company. A special thanks to Kathy for joining me on this one.

Interested in learning more about the authentic English Experience? See our post on Experiencing Afternoon Tea in England.

The Ballantyne Hotel (704) 248-4100 serves afternoon tea Friday – Sunday, 1pm – 4pm. They also hold specialty themed teas and are open for additional services during summer. You must call the hotel to reserve a place ahead of time.

Note: This post is NOT sponsored by the Ballantyne Hotel.

We recommend and use these companies to arrange our travel plans; they make travel planning easy and affordable. If you have questions on our experiences, feel free to ask us!

How To Spend A Long Weekend At Niagara Falls

As an Amazon Associate I earn from qualifying purchases.