You can support this website, at no additional cost to you, by using our links to purchase; hotel stays, rental cars, travel products and more. Learn more.

About four summers ago, while exploring near Banner Elk and Roan Mountain State Park, we stumbled across the gorgeous and easy to reach Elk River Falls. Also called Big Falls. As we were in the area again this autumn, we felt this 65 foot waterfall deserved another visit.

We were even very lucky to run into some Appalachian Trail hikers who showed us the way to Jones Falls. A nearby waterfall that’s not even listed on the map. Though a relatively easy hike, the trail isn’t well marked. No way we would have found it without their help.

As Elk River Falls is in North Carolina, and Jones Falls in Tennessee, you have the perk of Two Waterfalls, Two States, for One Hiking Trail! Plus, it includes a short piece of the famous Appalachian Trail, what more can you ask for.

This hiking guide is to help you make the most of your time at Elk River Falls. Plus, help you find your way to the more elusive Jones Falls.

Elk River Falls are very popular in summer because of the swimming holes, but we’ll come back to that in a minute. If you’re not into playing in the river, autumn is a much better time to go. Less crowds, and less trash. Yes, sadly this area is often abused.

We wouldn’t exactly consider it a “hike” to Elk River Falls. The sign at the parking lot says it’s .5 miles, but really it’s more like .3 miles one way.

From the parking lot, cross the planked bridge and climb the short set of stairs. You’ll quickly see a fork in the trail. Follow it down to the right close to the river.

After a short trail, you’ll come to a larger set of stairs. Once you descend the stairs, that’s it, you’re there. The waterfall will be on your right. Climb on to the flat rock to enjoy the view.

When you’re ready to leave, just head back out the way you came.

Immediately, from the parking lot we were hit with a barrage of signs about the dangers of waterfalls and deaths in the area. Two people and three dogs in 2018 alone. Plus, online it looks like several serious injuries in 2019.

Our memories flashed to a rope swing and a ton of college aged kids jumping off the cliffs on our first visit. However, the two people that died in 2018 drowned from undertow currents and didn’t actually jump in.

Though extremely tempting, it is not wise to jump into or even swim in the large pool at the bottom of the waterfall. There are several underwater rocks people have hurt themselves on, but the main danger are the strong currents.

Hopefully it goes without saying, it’s not very smart to swim at the top of the falls either.

If you do want to swim, there’s a beach like area just on the other side of the flat viewing rock.  Lots of kids play in these very shallow pools. Adults typically lounge around the river.

Finding Your Way To Jones Falls

Jones Falls is only about 1.7 miles from the Elk River Falls parking area. At around 100 feet, the waterfall drops for around 30 feet before cascading down rocks the rest of the way.

From Elk River Falls, head back to where the trail diverges, but this time stay left. Basically, the trail starts as a rough 4×4 track, but is an easy walk. As it was fall, the trees were bursting with color.

Follow the dirt road for a while. Eventually it will curve towards the river and narrow to a gassy path. It follows the left side of the river for about 10 minutes. We found this area quite muddy, with a few tiny streams to cross.

After a short walk, the trails ascends a few rocks and opens into a wooded area. To the right is the Jones Branch, a stream that runs into Elk River. We needed to cross this stream to continue on the trail.

Once on the other side of the stream, there was a steep, but short, ascent up. At the top, a green ribbon tied in the tree signaled a convergence with the Appalachian Trail. To the left, the trail wound up and into the woods. To the right, down and towards the river.

Not knowing exactly where Jones Falls was, we went with logic and followed the river.  We probably walked about 20 minutes before turning around and going back to the Jones Branch stream crossing.

NOTE: Apparently there is another waterfall called Splash Dam Falls if we would have kept going along the trail following the Elk River. So if you have time, it is possible to hit three falls in the day.

Fortunately, on our way back we came across a group of Appalachian hikers who had previously been to the Jones Falls. It was our logic that failed us. Darn logic!

At the Appalachian Trail (white blazed trail) take the left to go up and into the forest. It was probably about 20 minutes of uphill hiking before we came to the first set of stairs.

From the first set of stairs it was another 20 minutes to Jones Falls.

At the second set of stairs, we found a sign to Jones Falls. Finally some directions! Be sure to take that left and do not go up the set of stairs.

Finally Made It To Jones Falls

The sun was setting quickly behind Jones Falls by the time we made it there. We had a few minutes for photos before having to bust it back on the trail.

However, if you have the daylight, energy and … well guts, you can weave your way to the top of the falls. It’s quite the difficult climb, with ropes to help along the way, but we’ve heard it’s an amazing view.

Maybe another time for us, on this journey we were just happy to find it and get out again before dark.

To get back to the parking lot just follow the way you came. Because it was downhill most of the way, it only took us about 45 minutes, though we were booking it.

How To Get To Elk River Falls

Use the address Elk River Rd, Elk Park, NC 28622 to find the parking lot for the falls. You’ll find it only about 4.5 miles outside the tiny town of Elk Park, NC. Elk River Falls is located in Pisgah Game Lands, while the trail to Jones Falls crosses over the Tennessee border. Access and parking are both free.

Where To Stay Near Elk River Falls

Most of the accommodation in the area is near Banner Elk, about 20 minutes away.

For more on western North Carolina, check out our other posts.

We recommend and use these companies to arrange our travel plans; they make travel planning easy and affordable. If you have questions on our experiences, feel free to ask us!

We appreciate your support of the website. At no additional cost to you, when you use our links to purchase items or services, we earn a commission. Learn more.

Book Flights
We use Skyscanner to compare flights all over the world. Their “anywhere” feature shows the cheapest destinations from where ever you want to fly.

Book Accommodation
Booking.com has been our go to hotel booking site since 2007. They are easy to use, with a great selection of accommodation, and usually have the best deals.

Book Rental Cars
Rentalcars.com make comparing offers across various companies easy. We find them the quickest and easiest way to identify the best deal, no matter the country. 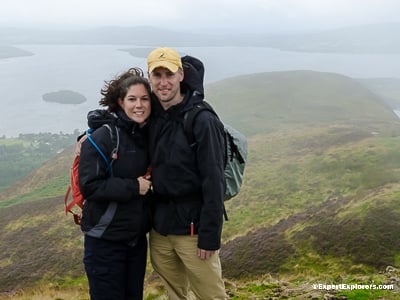 We use cookies on our site to give you the best personalized experience. If you are happy with this please “Accept,” otherwise you can change your settings.
Accept
Cookies

We also use third-party cookies to understand usage of our website, for continuous improvement. These non-necessary cookies are only stored in your internet browser with your consent. You can opt-out of non-necessary cookies using the controls below. Opting out may impact your browsing experience. Read our full Cookie Policy for more details.